A step-by-step course walking you through your first-draft. Get instructions, tips, and examples from story inspiration to 50,000-words.

There’s no need to have a story idea ready (but great if you do). Inspiration is the first thing we’ll take care of!

Second, you’ll prepare yourself to write. Including genre, pov, tense, characters, and an outline!

They say, “Write Every day.”

Like that’s the key to writing a novel. But they gloss over what to write.

If you’ve ever struggled with where to start your novel or what to write next, you’re not alone!

And the reason isn’t that you’re too dumb or “aren’t a writer.”

It’s because you haven’t developed your writing skills!

I know! I know! You’re trying to get those skills, and you’ve probably learned a lot of writing theory.

But you still haven’t been able to get that first draft done.

Because writing is hard.

Seriously. It’s not easy to write a book.

But most importantly, there’s A LOT of information out there. How do you sort through the noise? What’s important for just beginning?

Your first draft is not that time to worry much about theory.

Editing is where you’ll fix it up and make it stunning. And editing comes AFTER your first draft.

If you’ve been trying to worry about everything while writing, it’s no surprise that you’re getting overwhelmed.

Here’s what you need to know…

No first draft is going to be perfect.

This is why it’s important that you just write that first draft.

From inspiration right up to the 50,000th word, you’ll get instructions for what to do every day!

See TWO full plot ideas, with examples of what to write each day. You’re free to use these examples as your own!

Don’t worry about falling into bad habits. There are regular check-in points and tips to keep you on track!

REAL Examples from the Course

Check out these examples taken directly from the course (click to expand & zoom). 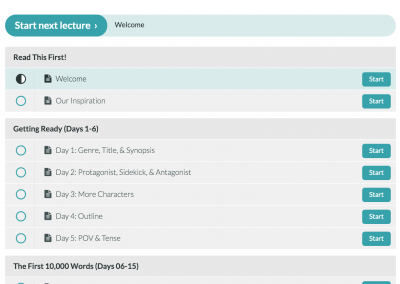 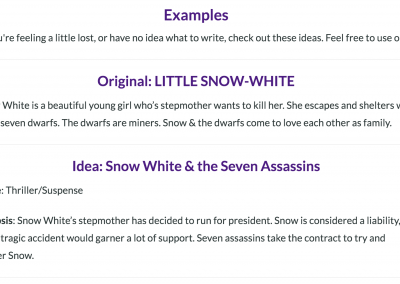 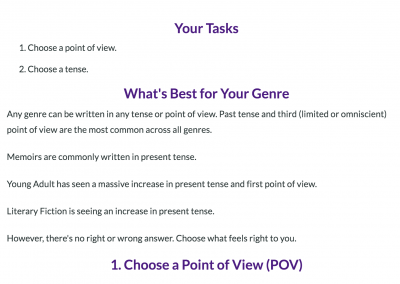 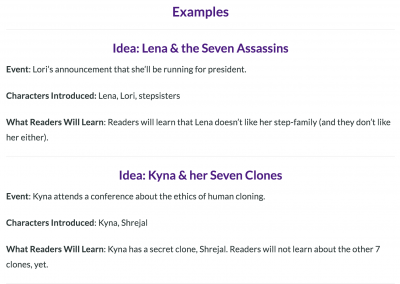 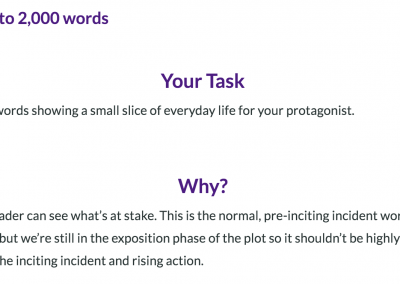